According to Snorri's Prose Edda, there are Twelve Aesir (though apparently by twelve he really means 14--is that a godly dozen?) Lest you think this is some coincidence that there are "Twelve" Aesir, just as there are Twelve Olympians, you should know that Snorri also wrote in the Prologue of his Edda that Asgard is also known as Troy. I think that should answer your question. (Sorry, reading Snorri brings out my sass, friends.) But the Twelve Aesir are not alone--ruling beside them are the Twelve Ásynjur, the goddesses, and credit where credit is due, at least the women didn't get the shaft:

Hárr answered:
"The divine Æsir are twelve." Then said Jafnhárr: "Not less holy are the Ásynjur, the goddesses, and they are of no less authority."


The Twelve Aesir he lists are:

1) Odin the All-Father, of course. Married to Frigg, who sees all fate. But make no mistake, Odin is the man in charge.

Odin is called Allfather because he is father of all the gods. He is also called Father of the Slain, because all those that fall in battle are the sons of his adopt on; for them he appoints Valhall and Vingólf, and they are then called Champions. He is also called God of the Hanged, God of Gods, God of Cargoes; and he has also been named in many more ways [...]

2) Thor, who oddly is not immediately acclaimed as god of thunder-- though this might have something to do with Snorri's bias and his intention to turn the Norse gods into men*. Instead, Thor is attested to primarily as the strongest god, and of course there is a mention of his goat-drawn chariot, Mjolnir, the belt which doubles his strength, and the gloves that help him grip his hammer.

3) Njördr! Technically not an Aesir, but a Vanir (father to Freyr and Freyja), and given as a hostage to the Aesir. He's married to Skadi who loves the snow and the mountains, as opposed to the sea, which seems to cause them some slight marital problems and keeps them apart. Snorri tells us:

He rules the course of the wind, and stills sea and fire; on him shall men call for voyages and for hunting.

4) Freyr, son of Njördr and twin brother of Freyja. He's god of rain, sun, and growing season type things. Basically he takes care of the crops and prosperity of that nature. Snorri says he's the most renowned of the gods, but I don't buy it.

5) Freyja, daughter of Njördr and twin sister of Freyr, and when Snorri calls HER the most renowned goddess, I have no trouble believing it. Freyja was a war goddess, riding out in her cat-drawn chariot, and of those that died, she split the warriors down the middle with no lesser god than Odin himself. In addition, she can also be invoked as a love goddess. Freyja is also counted among the Ásynjur.

he is most daring, and best in stoutness of heart, and he has much authority over victory in battle; it is good for men of valor to invoke him. It is a proverb, that he is Týr-valiant, who surpasses other men and does not waver. He is wise, so that it is also said, that he that is wisest is Týr-prudent.

7) Bragi, of course! The Poet! God of wordsmithing and skaldship. Snorri calls him a god of wisdom as well, and he's married to Idunn, who is the only goddess capable of picking the golden apples (Snorri says she only guards them), which the gods require to keep their immortal youth and strength.

8) Heimdall, the White God, born of no less than nine women, sisters, who may or may not also have been virgins. He guards Bifrost, the rainbow bridge to Asgard, and:

He needs less sleep than a bird; he sees equally well night and day a hundred leagues from him, and hears how grass grows on the earth or wool on sheep, and everything that has a louder sound. He has that trumpet which is called Gjallar-Horn, and its blast is heard throughout all worlds.

I'm not entirely sure how great an attribute it is to need less sleep than a bird, but the rest of it is pretty excellent. Snorri also claims he has golden teeth, which seems kind of impractical, all things considered. I bet he has some SERIOUS hot/cold sensitivity when he eats, if that's true.

9) Hödr somehow makes the cut into the essential twelve, though he's blind, and sadly he's the god responsible for the death of Baldr (who apparently doesn't get included anymore, and seems to be dead already, when this was written which does not really bode well for anyone). Kinda-sorta. If being tricked by Loki counts as responsibility. He doesn't really have any other attestation besides "sufficient strength" in this opening summary of the Asgardian gods, so I'm not sure why he's included at all, really. I mean, SUFFICIENT strength? really? That's like saying the guy is adequate with a sword. I dunno about you, but it doesn't inspire a lot of confidence in ME.

10) Vidarr feels like another place-holder for the twelve-of-which-there-are-actually-fourteen. He's nearly as strong as Thor, reliable, and evidently "the silent god." But. Well. That seems to be all he has going for him. Seems like a pretty dubious honor to me.

11) Váli is explicitly named as a son of Odin by Snorri (the only god aside from Thor, so far, though there are plenty of other attestations to a plethora of Odinsons around and about). He's another god who can be counted on in a fight, and has a talent for marksmanship.

12) Ullr is a son of Sif (who oddly enough was not named when Snorri first brings up Thor, but he does mention here that Ullr is the step-son of Thor, which implies that Sif is Thor's wife, if a bit after the fact), and even better with a bow than Váli. In addition, he's some kind of pretty, and... really good on snowshoes? I feel like we're reaching here, Snorri. But his saving grace seems to be as a god of single combat, and since that seems to be all he really does, invoke him then or never!

Bonus God 13) Forseti, a son of Baldr and Nanna (Baldr's wife died for grief after his untimely demise, so she's no longer among the living either). He takes Baldr's place as a god of justice with some sweet digs in Glitnir, silver-roofed and gold-pillared. (If Freyja, though listed in this section, is not actually counted, we'd still be at 12. Snorri is weird.)

Bonus God(?) 14) Loki. Of course, we can't forget him. The Mischief Maker and "the first father of falsehoods." His wife is named Sigyn, and he has a number of unfortunate children which are attested to immediately following, one of which is the aforementioned Fenrir. It's important to note though, that Loki doesn't seem to have been worshipped as a god, really, at all, so his inclusion here is a little bit extra strange -- though maybe he's seen as an extension of Odin? Or the Jester of the Court? Snorri says:

Loki is beautiful and comely to look upon, evil in spirit, very fickle in habit. He surpassed other men in that wisdom which is called 'sleight,' and had artifices for all occasions; he would ever bring the Æsir into great hardships, and then get them out with crafty counsel.

And there you have it! The Twelve (ish) Aesir, according to Snorri. Three of which aren't Aesir at all, but Vanir, and several more of which are pretty, well... underwhelming to hear about. Unlike the Olympian gods, there's a lot more overlapping and kind of random seat-warming among the Norse gods. The prevalence of warriors makes sense for the Norsemen, who as we all know, valued reputation exceedingly, and often went out in search of it, either by exploration or raiding -- and let's be real, the exploration would usually become raiding at some point, unless the lands weren't occupied.

But again, I think it's important to reiterate -- Snorri is only one source, and he only offers us one small snapshot for a particular non-religious purpose, and he wrote his Edda hundreds of years after Iceland officially converted to Christianity, and even longer after Christian ideas started seeping into the roots of Norse Myth and practice. So whether more than just Snorri considered these particular gods to be The Twelve Aesir or not -- we can't really say. And whether Snorri's interpretation of these gods as the highest was even true for Iceland and its pagan height... it's hard to know for certain.

*Thor being the most popular of the Norse gods among the common people would be the uppermost god to unseat, and leaving out all his supernatural abilities in this attestation goes a long way in making him a lot more human, and a lot less impressive as a god. If I had to make a guess, I'd say that's a big reason as to why Snorri conveniently doesn't bother to mention anything beyond Thor's strength in the GYLFAGINNING. 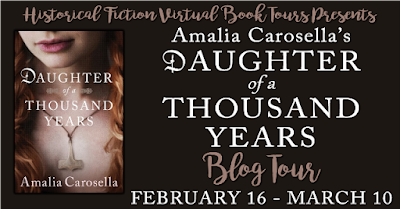 Don't forget to enter to win 1 of 100 (!!!) kindle copies of DAUGHTER OF A THOUSAND YEARS on Goodreads, or just go ahead and give it a pre-order if you prefer!