This year is going to be busy -- particularly heading into Spring, but for good reason! ALL THE WRITING!

I'm currently 58,000 words into my next book (a non-Greek-myth historical adventure), and counting. Which puts me about 6,000 words behind where I *wanted* to be by the end of this month, but there's time to catch up. Unfortunately, the sacrifice is going to be on the blogging-side of things (in addition to the majority of my social life -- whoops!) So expect updates when I actually have exciting news, but things will be quiet around here until I conquer this monster of a draft!

In better news, if you missed it before Christmas -- BY HELEN'S HAND now has beautiful cover art and a May 10th release date! Along with some back cover copy for those of you hoping for a hint of what's to come: 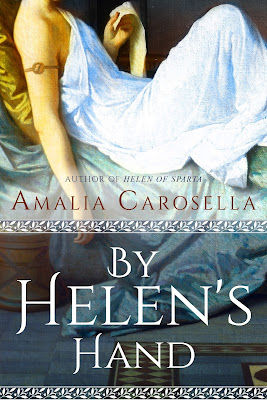 And if by some strange turn of events you have come upon this blog and NOT read HELEN OF SPARTA already -- it's on sale for kindle during January for just 2 dollars (and the paperback is still priced below $9!) so head on over to Amazon and order that copy for yourself (or a friend) while the sale lasts!

Posted by Amalia Carosella at 00:00 No comments: