What I Want to Write

These last couple of weeks as I've been researching different people and periods and places for something that might become A Book, I've been thinking a lot about what I want to accomplish as an author of historical fiction. What drives me to choose one story over another? To choose one person or place over another? What do I want to tie my books together when/if I eventually break away from the Bronze Age?

I hadn't really given it a lot of thought, but as I was researching, wrinkling my nose at this person or that period, it kind of jumped out at me. One of the things I tried to do with HELEN already, and would really like to continue to do, is give voice to people (in a serious and respectful way) who we, in the west, have been quicker to dismiss -- to acknowledge that perhaps these other, older cultures and people DID have their own meaningful experiences with the numinous or some greater spiritual power.

And maybe sometimes this means writing a book about Joan of Arc, who no one believed heard the voice of God (unless it was politically expedient, of course). Maybe it calls for a book about Ramesses the Great and Moses (both of whom, in that moment, must have felt sorely tested in their faith.) Or maybe it means writing books about Greek heroes who actually really are the sons and daughters of Olympians. And maybe it means digging into the Icelandic Sagas, and exploring the complicated relationships that the Icelanders and the Norse had with their gods, or the struggle to reconcile their old faith to the new one, when the White Christ came.

It's important to acknowledge the experiences and the beliefs of the people who came before us, and while we can't ever know for certain how real or imagined any god is or was, I want to be truthful to what the people of these times, these cultures, believed they were. Not just out of respect for the past, but for the present, too. Because there is still today, a great diversity of faith, and maybe by reading about it in the past, we'll have an easier time embracing it in the here and now.

I don't know if I'll always have the opportunity to write these kinds of books, of course -- but they're certainly the stories that make my fingers itch the most!
Posted by Amalia Carosella at 00:00 2 comments: 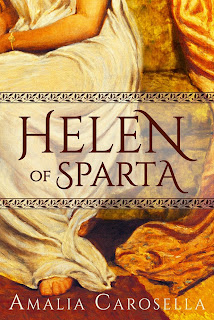 The biggest news around these parts -- HELEN OF SPARTA officially has a sequel in the works!!

Right now that's all I can tell you, but I look forward to sharing more about Helen II with all of you! Like, you know, a title, or a release date, or a cover, or even *gasp* the book!

But in the meantime, my other self is releasing the second book of a different series this fall, so if you like high fantasy, and you need something to tide you over... Well, you might venture on over to check it out!

This summer has been non-stop go go go go go, so I'm going to leave you with just the GOOD NEWS of Helen The Second for now. I hope it thrills you as much as it thrills me!

Posted by Amalia Carosella at 00:00 2 comments:

Email ThisBlogThis!Share to TwitterShare to FacebookShare to Pinterest
Labels: Helen, Helen of Sparta

Before I go any further, I would be remiss if I didn't address the bias of the source material I'm drawing from -- Plutarch had his own agenda in writing down the story of Theseus. He meant to show a parallel between Theseus and Romulus, the founder of Rome, and by doing so, demonstrate Rome's greatness by the greatness of its founder. In this, it behooved Plutarch to show Theseus in a favorable light so that favor would reflect on Romulus and Rome itself. The other bias of Plutarch is his habit of discounting all godly influence, and without the involvement of the gods, these mythologies alter pretty dramatically.

For instance, if Theseus was compelled to leave Ariadne behind that she might be made the bride of Dionysus, and through this, a goddess, that is a different thing entirely than his sailing off into the sunset to abandon her of his own accord, showing no regret. Or, in Paris's case, if Aphrodite swept Paris off the battlefield during that crucial fight with Menelaus against Paris's own wishes to deposit him in Helen's arms, that is a very different story than one in which Paris consciously flees from Menelaus, giving up the fight when he realizes he will die, and hiding in the palace in Helen's bed to let Hector do his fighting for him.

But even putting the issue of the gods and their absent-influences aside, I would argue that the same young man, who, seeing the pain of the people in Athens at having to give up their own sons and daughters, volunteers himself to travel to Crete and be part of this tribute to do what he can to lift their suffering would not, after showing such empathy, then callously abandon a woman who mothered his sons (Plutarch tells us that with the other women he may or may not have met along the way previous to this who gave him sons, he then took responsibility for seeing them married.), or callously abandon any woman who might have helped him in general, even without children. After all, hasn't he just risked his life for seven virgin Athenian girls? And the last woman who helped him and offered him kindness on his quest against the Marathon Bull, he repaid by creating what amounts to an annual holiday in her name, to honor her in perpetuity with sacrifices.

Theseus was not raised in Athens. He did not even know who his father (the Aegeus half) was until he was a young man strong enough to lift a boulder. After being made Aegeus's heir it was probably wise of him to make nice to the people he would rule, but to appease them, all he would have needed to do was throw his name into the lottery-- or APPEAR to throw his name into the lottery. Who would have known otherwise? Plutarch specifically states (emphasis mine):

These things sensibly affected Theseus, who, thinking it but just not to disregard, but rather partake of, the sufferings of his fellow-citizens, offered himself for one without any lot.

So what's the truth about Theseus and Ariadne? Judging by Plutarch and the character he's presented, it seems improbable that Theseus would change his colors so completely as to utterly abandon Ariadne, having taken responsibility for her. But that doesn't mean he didn't abduct her. The truth is, there's just no knowing what exactly went on between them, or what promises were made and broken. The only thing we can say is that once upon a time, there was a woman named Ariadne, and a young hero named Theseus, and when they crossed paths, a kingdom fell.

For my part, I'd like to believe Theseus treated Ariadne honorably, as far as he was able within the boundaries set by his culture and the gods. I certainly don't think we need to slave ourselves to the idea that Ariadne was wronged -- and if Plutarch makes anything clear, it's that there's room for us to tell a different story. A story in which Ariadne is neither abandoned nor abused, but following a course of her own making.

I, for one, think it's long past time we did so.
Posted by Amalia Carosella at 00:00 No comments:

Theseus and Ariadne (I)

A major area where Theseus comes under criticism is in his dealings with women. In particular, his relationship and abandonment of Ariadne, and later, the question of his relationship with the Amazon Queen he may or may not have abducted but certainly carried on some kind of affair with. Today I'm going to focus on Ariadne and Plutarch's history of Theseus!

As Plutarch himself admits:

There are yet many other traditions about these things, and as many concerning Ariadne, all inconsistent with each other.

And he isn't wrong. In Plutarch's Theseus, he gives us a fair rundown of the differing accounts, and I'll summarize them for you here, because quoting will make this the longest entry of all eternity. Generally, these stories fall into three camps:
The third is by far the least well known today, but you can see that these are the same contradictions that accompany the stories of Helen's abduction by Paris. No one really agrees, and different places and different poets had their own interpretations of what happened and who in the party was wronged.

Plutarch doesn't relate the stories which are commonly known in his time in any depth. (At which choice, I shake my fist in outrage from 2000 years in the future!) He does, however, mention two things I find interesting: firstly, that Ariadne may or may not have born Theseus sons (evidently whilst they were voyaging back from Crete, which is wow pretty fast gestation) who went off to found other cities/places, and secondly, he NEVER states that Ariadne asked for anything in return from Theseus in exchange for her help, only that Theseus takes her with him when he leaves.

What does this mean for Theseus's character and his relationship with Ariadne? Well, we'll discuss the context of all of this in the next post!
Posted by Amalia Carosella at 00:00 No comments: