Editing Cave! And an Amazon!

I know I only just got back 5 weeks ago, but I'm afraid I must AWAY again, because I've got edits to edit and family invading (pretty much non-stop between now and the end of August -- it is kind of unbelievable how these things have all worked out) and then, probably, More Edits! So!

What I'm trying to say is that it might be a few weeks before I'm back on the blog.

And in the meantime, here is the most beautiful bronze of an Amazon you'll ever see: 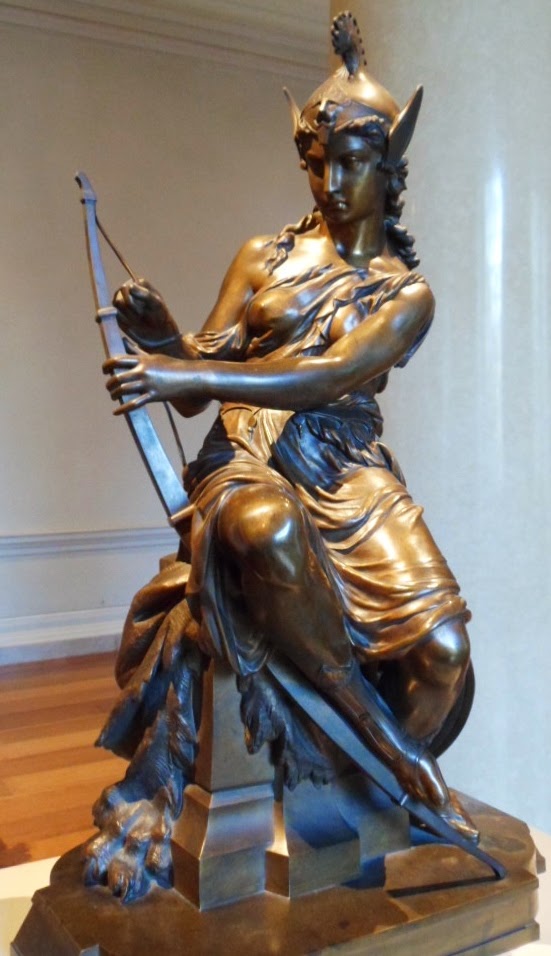 We found her in the National Gallery of Art.

Posted by Amalia Carosella at 01:52 No comments:

The Affairs of the Gods, or, How Could Their Victims Have Been So Clueless?

If you've been hanging around me or my blog(s) for any length of time, you probably now that the fiction writer in me favors the first approach -- and imagining these characters and trying to discover their motivations and understand the choices they might have made is where a lot of the fun of writing about them comes from. So with this question, it's only natural that I'd start with the more literal perspective. (It's more just more interesting guys!)

The Short Answer:
I suspect that they were less clueless and more just uninformed. 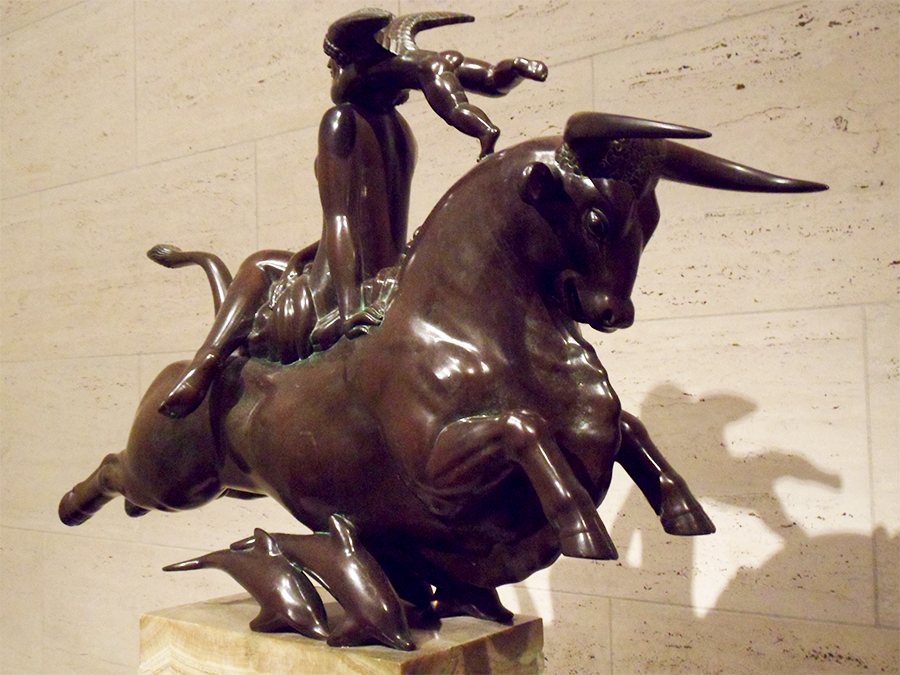 Here's the thing. Today, if some king's daughter were kidnapped by a really pretty bull, the whole world would know about it. Or at least the part of the world that pays attention to that kind of information, anyway. (She'd also be found and returned home, probably, rather than dumped in another country to marry into their royal bloodline, but I digress.) Back in Europa's time? It was probably more of a quiet, regional event. Why should she expect the bull of being a god in disguise, intent on stealing her away, if she'd never heard of Zeus pulling that kind of stunt?* Maybe, possibly, some kind of rumor of Zeus coming down as a shower of gold to... make sweet love? to Danae** might have been making the rounds somewhere in the Peloponnese, but it is REALLY unlikely the story would have made it as far as Phoenicia, where Europa was hanging out with her maiden friends, enjoying the attentions of a particularly tame bull.

Now maybe these two examples are cheating, because both of these women were earlier victims of Zeus' proclivities, but the fact remains that there are no guarantees that any one of the  importuned women who followed would have had extensive knowledge of the god's other exploits. There's a couple of exceptions of course. Alcmene, for example, was the granddaughter of Perseus, so the story of Great-Grandmother Danae could easily have been part of family lore before her run in with Zeus and the subsequent birth of Heracles. But since Zeus took the form of Alcmene's own husband, Amphitryon, there is really no possibly way that forewarning might have helped her avoid his attentions.

It's easy for us to see all these stories laid out neatly and chronologically, with repeated themes of Zeus putting one over on some poor beautiful girl, and wonder why these people couldn't figure it out. But the truth is, those stories weren't assembled into the written word at all until centuries after the fact. If you consider that the Trojan War was basically the end of the Age of Heroes, and all the philandering that entailed, then the majority of these events would have taken place during the Greek Bronze Age -- the Mycenaean and Minoan periods. At the end of which, civilization kind of collapsed and the Greeks not-so-promptly forgot how to write for several hundred years.

Oral history is a lot more limited, regionally, though Homer provides us with evidence that even oral stories could be spread -- if the bard thought the audience would be interested. But if he didn't?

Well. It sure makes me appreciate the bounty of the internet for self-education, that's for sure.


*Europa was mother to Minos, which means she was at least one, maybe two generations before Theseus and Heracles.

**Danae was the mother of Perseus, who was himself the very FIRST of the Greek Heroes. He did not actually ride Pegasus, and the Kraken is a sea monster out of Scandinavia. Just for the record.
Posted by Amalia Carosella at 00:00 No comments:

Heracles and Theseus in Contrast (and Euripides II)

In the latter part of his play, Euripides illustrates the bond between Theseus and Heracles. They’re friends, of course, and why wouldn’t they be, being the two most celebrated heroes of their time, and it goes without saying that Theseus is indebted to Heracles for rescuing him from Hades and the chair of forgetfulness. But more than that, they’re cousins. Family. And in Heracles' most desperate hour of need, when he is contemplating for the first time the thought of suicide to revenge upon himself the murder of his wife and children, it’s Theseus* who comes to his aid.

But what’s more interesting to me is the differences in ideology between the two heroes. Heracles takes upon himself all the guilt for the death of his family, in spite of the fact that Hera drove him into madness, removing from him his ability to reason, his ability even to recognize his own children and wife. Theseus feels differently, placing the guilt upon the gods, and arguing that even the gods sin and suffer. Theseus says:


“I cannot counsel you to die rather than to go on suffering. There is not a man alive that hath wholly ‘scaped misfortune’s taint, nor any god either, if what the poets sing is true. Have they not intermarried in ways that law forbids? Have they not thrown fathers into ignominious chains to gain the sovereign power? Still they inhabit Olympus and brave the issue of their crimes.”

It’s true. The gods are absolutely guilty of incest. Zeus and Hera are brother and sister, for starters. Plus there’s Heracles – a living example of weird family relationships.** And then there’s the whole gelding of Cronus. I mean, really.

But Heracles isn’t buying what Theseus is selling. Not in the slightest. He responds:


“For my part, I do not believe that the gods indulge in unholy unions; and as for putting fetters on parents’ hands, I have never thought that worthy of belief, nor will I now be so persuaded, nor again that one god is naturally lord and master of another. For the deity, if he be really such, has no wants; these are miserable fictions of the poets.”

And then, even more tellingly, in regard to Heracles’ own character:


“But I, for all my piteous plight, reflected whether I should let myself be branded as a coward for giving up my life.”

In the end, it isn’t Theseus’ argument that others have suffered what he has, or even the question of his guilt, at all. In the end, Heracles doesn’t kill himself because he doesn’t want anyone to think he was a coward. Because Heracles will not let anyone call him anything other than brave. In the end, all that matters to him is his reputation, and nothing the gods have done to him can even compare.


*my hero!
**First, some genealogy. Heracles is the son of Zeus and Alcmene, she herself a granddaughter of Perseus, who was, of course, a son of Zeus, thereby making Alcmene Zeus’s great-granddaughter, and Heracles both Zeus’s son, AND his great-great-grandson.
Just for the record.
Posted by Amalia Carosella at 10:22 No comments:

As you may or may not realize by now, I like the demigods. They're tragic and sometimes incredibly jerky and unlikeable, but part of me thinks that's what makes them so fascinating, particularly when trying to reconcile them against the modern world, and what we consider to be heroic. And one of our most plentiful sources on myths and legends and the characters of these fine (or not so fine) heroes? Euripides!

He wrote plays in Classical Athens, and we have a LOT of them, in bits and bobs and fragments, but also whole, and from these plays, we can tease out some of the cultural ideas of the time. For myself (and Heracles, who I am committed to getting a strong a handle on as I have Theseus, because he's a pretty complex dude for whom I am discovering new appreciation), I'm less interested in the politics and rhetoric than I am the mythology, and what Euripides' accounts are in regard to the various heroes and their stories. Sometimes he contradicts himself -- like with Helen of Troy: did she go to Troy or not? He has it both ways in two different plays. -- but that's okay, because those contradictions are places where I can start drawing my own conclusions and maybe twist the mythology in the direction I want it to go.

So far, I've picked up two important pieces of information on Heracles:
1) He had auburn hair, according to this play.
2) He had three sons by Megara.

The other fascinating thing about this particular play, is the fact that it begins while Heracles is in the Underworld, fetching Cerberus and rescuing Theseus from Hades -- the last of his 12 labors -- and Megara and his family are under threat of death at the hands of a usurper-king, waiting for his return. Now, my understanding of Heracles and Megara, was always that Heracles murdered Megara and their children in a fit of madness (set on him by Hera) and it was AFTER this, and to be cleansed of the blood on his hands, that he went about his Twelve Labors. This does not bode well for sorting out his timeline -- or maybe it just gives me the permission I need to sort things out into a chronology that will make for the best story.

When it comes to Mythology, you can only count on one thing: nothing is EVER conveniently linear!


More: Heracles and Theseus in Contrast (Euripides II)
Posted by Amalia Carosella at 00:00 No comments: