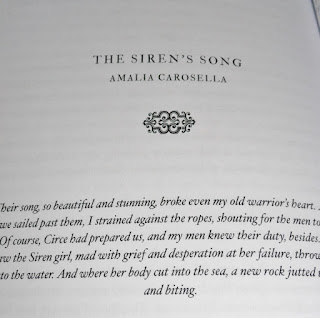 I have to admit to a little trepidation when I came on board this latest H-Team adventure -- retelling The Odyssey without gods or magic?! The period might have been my wheelhouse, but that particular approach most definitely was not my usual style. Add to that the very careful dance of making sure that my contribution to this collaboration wasn't an inadvertent sequel to By Helen's Hand, and I worried, at first, that maybe I wasn't quite up to the challenge.

But then the sirens called me. I could hear the song. And I knew what I had to write. What I was desperate to write and retell. I knew the sirens wanted to sing through me.

Of course that also required a small amount of reshuffling. The sirens weren't initially part of the general proposed outline of our project, and I'm super grateful for the flexibility of my co-authors in making room to allow me to tell their tale! Because I knew exactly where I wanted to begin. I knew precisely how to approach their story and their history in a world without gods or magic.

Or at least, without the traditional idea of magic. I still had at my disposal the magic of storytelling--the magic of the stories we tell ourselves, and the ways we create our own narratives, spinning heroics and humor out of the mundane or the tragic. And what could possibly be more fitting in a retelling of the story of Odysseus than for my sirens to have rewoven their own history, their own tragedy, into something magical?

That was the line upon which I built all the rest. A line that didn't make the cut into the final version of the story, but which became the very foundation of my poor, isolated, sirens and their history. Because in a world without gods or magic, it is the stories people tell themselves that matter most. Personal and family and community narratives were the only history they might know--and that went double for my lonely sirens.


So who were my sirens? How did they come to live upon their rocky, barren island to sing poor sailors to their doom?

Grab your copy of A SEA OF SORROW: A NOVEL OF ODYSSEUS, and find out!

Amazon | Barnes&Noble | IndieBound
Posted by Amalia Carosella at 12:43 No comments:

Email ThisBlogThis!Share to TwitterShare to FacebookShare to Pinterest
Labels: A Sea of Sorrow, Odysseus, sirens, The Odyssey, The Siren's Song

As part of my research for A SEA OF SORROW, of course I found myself rereading The Odyssey -- and I couldn't help but wonder, as I read:
Who *are* these men?

We know some of their names, of course, and even who their fathers are. We know that they seem to have some pretty poor manners, and as guests and suitors they have overstayed their welcome to an extreme degree (though it seems Penelope is in part to blame for not sending them away, herself, perhaps, too.) But. Who are they in the greater scheme of Ithaca's kingdom and community, post Trojan War?

Presumably, Odysseus took a majority of able-bodied men with him to Troy to fight. We know these suitors are the sons of now-old men, noble houses of Ithaca who were part of Odysseus's assembly. The sons of men who are now too old and weak to rule them -- much like Laertes is too old and weak with grief and sorrow to guard Penelope and Telemachus from the suitors, or even to engage in Ithaca's assembly to any degree. Had they been younger men, the fathers of these suitors would have left 20 years earlier with Odysseus to fight, right? And if the suitors had been older men themselves, they also would have left, for the most part, 20 years ago to fight with Odysseus.

So are these Suitors second or third or fourth sons (of second wives, perhaps)? Not quite so young as Telemachus, clearly, who was an infant when Odysseus left, but old enough to see their brothers sail off in his company, and just a shade too young to follow? Old enough to grieve for their brothers who never returned home? Are they acting out, taking back what they lost in some way, by pillaging Odysseus's stores in his absense and courting his wife?


"Think: not one of the people whom he ruled
remembers Odysseus now, that godlike man,
and kindly as a father to his children!" (Fagles, p 100)

Is he accusing the Suitors themselves of not knowing or remembering Odysseus, suggesting that perhaps they were too young to have really engaged with him in any meaningful way? Accusing the old men of the Assembly of forgetting the kindness of their king, or betraying the kindness that Odysseus showed them by not standing against the abuses of the suitors?

It seems likely that reinforcements came to support the Greeks (generic national identity used loosely, here), so why didn't these suitors travel to Troy to fight at some later point in the war? Or had they not yet quite come of age, even then? Say they were only 5 or 6, and hadn't quite reached manhood before Troy was sacked? But that would make them only 26 to Penelope's mid thirties, at the youngest, assuming she was in her early/mid-teens when she married Odysseus and bore him Telemachus, now nearing 20.

Odysseus mustered 12 ships when he initially sailed to Troy with the army, according to Homer's Catalogue of Ships, and in the Odyssey, Odysseus claims to have begun his journey from Troy with a dozen ships, still. twenty to thirty oars per ship would mean a minimum of 240 to 360 men -- none of which returned home, save Odysseus himself. Could resentment for the loss of so many have fueled the blind eye that these old men turned to their youngest/younger sons who lived? Or simply the desire to spoil them, because they had not been lost when so many others had been?

Honestly, I'm kind of shocked that upon his return Odysseus is allowed to keep his crown, after losing so many men -- hero-kings have been thrown out of power for less, after all -- but perhaps it is the slaughter of the suitors that secures his power in the end. The old men, after all, clearly don't have the strength to stand against him when they cannot stand against their own sons. And with the suitors' deaths, an entire generation of Ithacans, ultimately, is wiped out -- leaving Odysseus with no one to challenge him at all.

Don't forget to grab A SEA OF SORROW from Amazon, Kobo, iBooks, and B&N, (or even Amazon UK), or add it on goodreads!

Amazon | Barnes&Noble | IndieBound
Posted by Amalia Carosella at 12:04 No comments: