Some Hard Truths and Gloria Victis 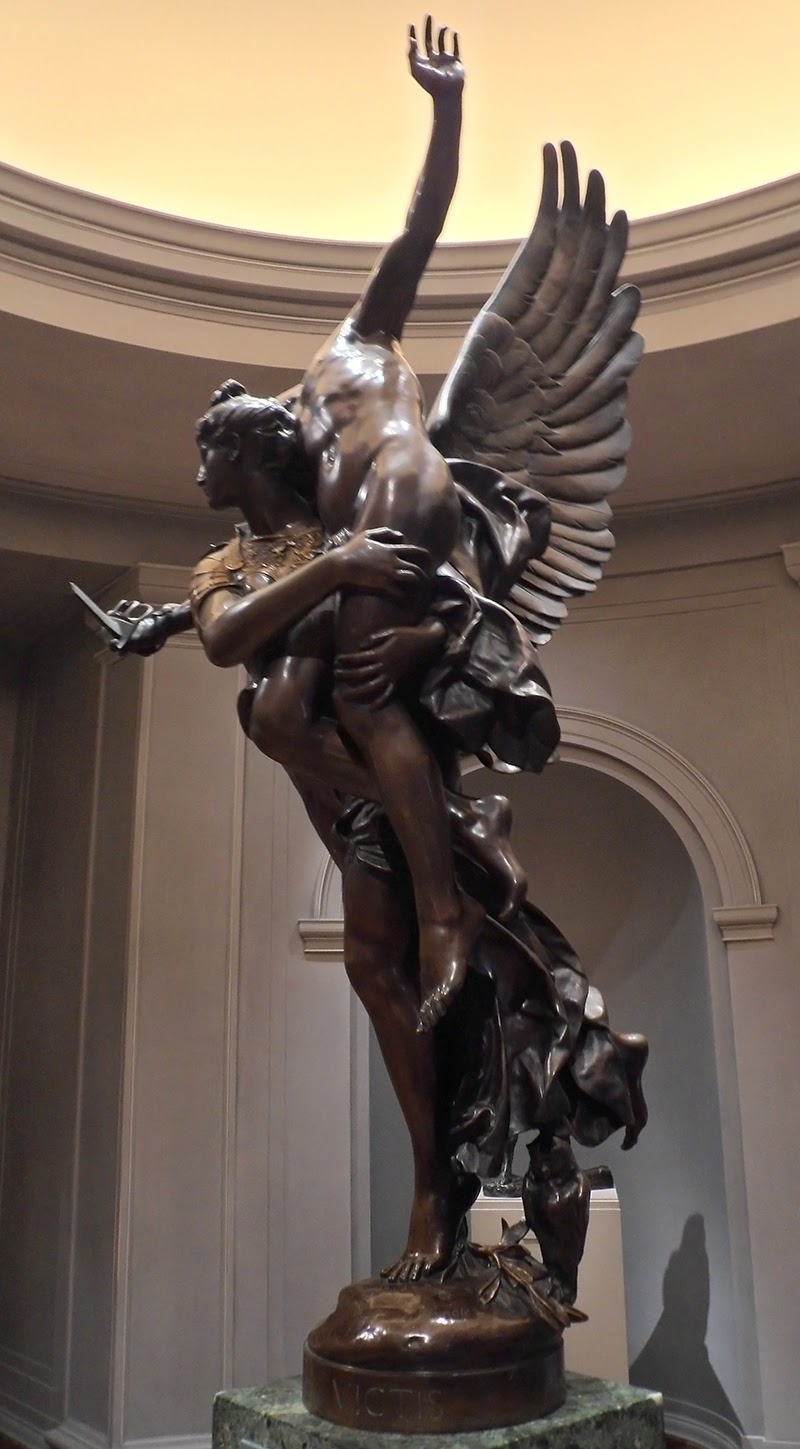 I don't discuss much of my personal anything on this blog, but there are some hard truths being revealed which necessitate me to take a bit of a hiatus again --

1) My cat is on the downward slope of a very wearing battle for her health, and we are pretty sure the end is coming in the next couple of weeks. What time I have that is not taken by deadlines or absolutely necessary work is now spent in her care -- making sure she eats what little we can get her to eat and is medicated, making sure she knows she's loved, making sure that when the day comes that there is nothing left to do to make her comfortable, I know I put her first and did right by her. She's only 10. We thought we'd have a lot longer with her.

For those of you who don't have pets, I just ask for understanding, because this is a really, really difficult time for us. Particularly as it has come on the heels of another loss, which leads me to the second event which necessitates my hiatus:

2) Earlier this year we lost El Husband's grandmother, and now that the weather is turning, the family is gathering for funeral services. Ourselves included. 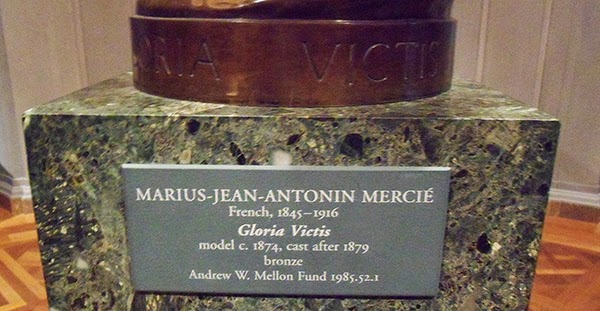 The third item is a more positive "I've got a lot on my plate in April" bullet point, which I'm very grateful for, but means that the headspace I have left for blogging is pretty much burned up with all the OTHER words I need to be writing. So.

We'll see you on the other side of the writer-cave-tunnel, from which I hope to emerge in May! And in the meantime, allow me to share with you this fantastic bronze -- Gloria Victis, because regardless of what comes, or how hard things get, I believe that I will find the strength to triumph, if not gloriously, at least... somehow. At heart, I am very much the optimist. 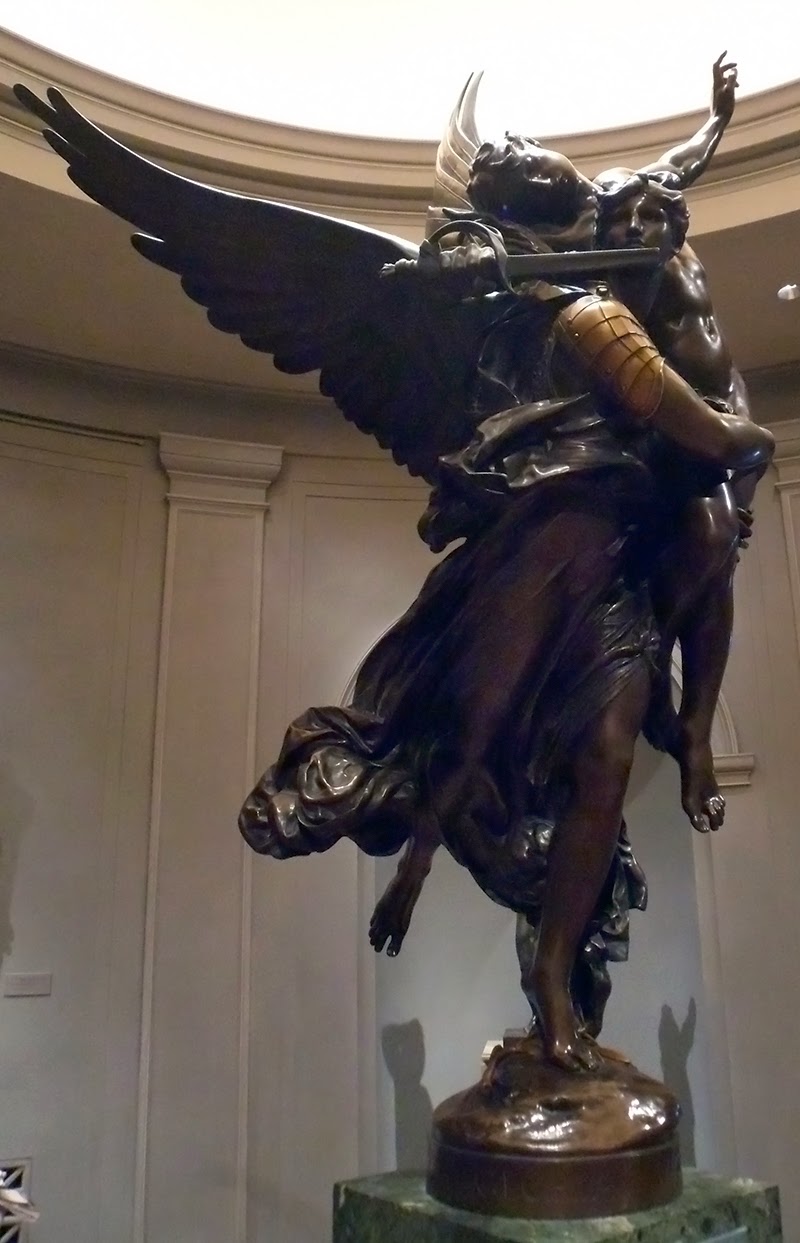 (And if that isn't Athena-Nike, or at least Nike, I do not know what is.)

photos taken by and belong to me!
Posted by Amalia Carosella at 00:00 No comments:

Even Older than the Bronze Age: Copper Age Artifacts

There's an exhibit in New York City going on, now, at NYU, which has put on display a number of artifacts from the Copper Age! What I think is really interesting, is that some of the pottery figures remind me a little bit of the bronze age/Minoan/Mycenaean figures I've seen -- but, in the immortal words of LeVar Burton, you don't have to take my word for it:

There's some more information about the exhibit on the NYU website -- and I'm not going to lie, it makes me want to take a trip down to the city to see these amazing artifacts with my own eyes!

And for your reference, here is some video of Mycenaean figures -- the resemblance could very well be just a passing "this is how figures must be constructed from pottery" thing, but, I don't know... it's just interesting to compare and contrast! Jump to about 40 seconds in to go directly to the figures themselves:


Posted by Amalia Carosella at 00:00 No comments:

Let's start with a song, because I recently had the pleasure of seeing Dar Williams live, and she's a great advocate for mythology, if you ask me, and her song CRYSTAL CREEK is totally about Artemis, and I absolutely love the way she brought this particular myth forward with a modern framing.


But this post is mostly an excuse to share this sculpture which I came across in the National Gallery of Art in DC, of Artemis/Diana. (And the photo I took which is not completely crooked! SHOCKING, I know!)

There's just something about the images of Diana with her hounds, or on the hunt, that really grab me. This is from the 1920s, and it's absolutely stunning, if perhaps a bit art-deco-ish to my untrained eye.

(Yes, I'm still writing. But this sculpture totally deserved its own post, anyway.)
Posted by Amalia Carosella at 00:00 No comments:

Pretty commonly, when Zeus wanted to get it on with a lady forbidden to him (either by his marriage to Hera or parental control), Zeus took the form of something else to disguise himself. Sometimes this disguise was for the benefit of those who might be watching for his next infidelity, but sometimes it was to deceive the woman he wanted, grant her a false sense of security, and then do the deed once she was in his power.

Callisto, you see, was a sworn virgin, a nymph of Artemis, who herself was a virgin goddess. So what did Zeus do in order to get with his daughter's ladyfriend and devotee?

Apollodorus (3.8.2) presents the story this way:


Now Zeus loved her and, having assumed the likeness, as some say, of Artemis, or, as others say, of Apollo, he shared her bed against her will, and wishing to escape the notice of Hera, he turned her into a bear.

If Zeus took the form of Artemis herself in order to get close to Callisto, and then when he had her in his grasp, took her virginity and impregnated her, there is no excuse for it. He could have at least had the decency to present himself as a dude, so Callisto wouldn't have been caught completely unaware. But this is only the first half of the story -- the second half is what happened after. Because Callisto? she didn't get the Happily Ever-married-off-to-some-other-guy-and-leave-the-fruit-of-this-unwanted-labor-to-die-of-exposure After.

In the next breath, Apollodorus tells us:


But Hera persuaded Artemis to shoot her down as a wild beast. Some say, however, that Artemis shot her down because she did not keep her maidenhood. When Callisto perished, Zeus [...] turned [her] into a star and called it the Bear.

Now look. Zeus has power. He can give the gift of immortality when he wants to, and if he can turn a girl into a bear, he can darn well protect her from Artemis' bow, even from Hera's wrath, were he moved to give said girl just a moment more of his attention beyond the pleasure he's stolen from her body.  But he doesn't. He almost never does. And I really struggle to understand why. Is it to make these women cautionary tales? Even your virgin goddess won't protect you, if you catch the eye of a man? Your virgin goddess will turn on you, the moment you break your vows, whether you do so willfully or not? Are these stories meant to keep women in their place? Tied to men and the protection of fathers, brothers, and husbands? I can't decide. But I do know one thing:

This particular story is why, in my most humble of opinions, Poseidon will always be classier than Zeus.
Posted by Amalia Carosella at 18:50 No comments: