Son of Zeus: The Modern Adventures of Pirithous

It's been pretty quiet over here because--well, social media and also pandemic plague times, and my Amalia Carosella stuff got a little lost in the excitement of launching a third entire pen name last year, Amalia Theresa, for sexy romcom style contemporary romances.
But it's 2021 now, and for you, that means: MORE PIRITHOUS!
If you've been following me on social media, you might already know that SON OF ZEUS was released exclusively to Patreon Patrons in a serialized format beginning in 2019. This summer, it's coming out in wide release for everyone else to read in paperback or the ebook format of their choice! Which means I have a goodreads link for you in preparation, even if I haven't quiiiite settled on the exact release day yet. (Right now it's looking May-ish?)
It also means that the first two chapters are available for you to read over on patreon as a teaser, and so is the rest of the book for as little as a dollar a month, if you want to get your read on in advance!
You'll notice, too, that this book is authored by BOTH Amalia Dillin and Amalia Carosella--that's because while Pirithous is an Amalia Carosella character--the same Pirithous you all loved in HELEN OF SPARTA and TAMER OF HORSES--the contemporary setting and his adventures as a fish out of water in upstate New York felt a little bit like an Amalia Dillin story at the same time (in fact, it was written well before Amalia Carosella was even invented!)
I think this book will have a lot of appeal to BOTH audiences, and I wanted to make sure readers of Amalia Dillin and Amalia Carosella could find it!
A NOTE FOR PATREON PATRON READERS: The Wide Release edition of SON OF ZEUS will have some small edits and expansions--nothing that makes a big difference to the story and mostly just places where the wording felt like it could be stronger or I needed another line to clarify Thalia's thoughts or Pirithous's intentions.
BUT WAIT, THERE'S MORE! 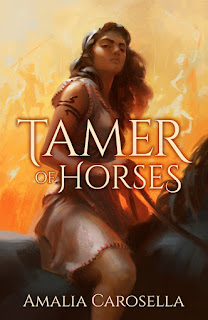 In celebration of SON OF ZEUS's much belated release, TAMER OF HORSES is also going wide! No longer will you only be able to enjoy Pirithous's wedding to Hippodamia and the war with the centaurs that follows on kindle alone (and also everywhere in paperback already) but very shortly, you'll be able to grab it from apple books, for nook, kobo, and request the digital edition for your local library!
I hit publish just this morning and will update this post and Tamer's home page with the new links once they start going live.
Taking TAMER OF HORSES wide has always been kind of a huge, terrifying leap for me with HELEN OF SPARTA and BY HELEN'S HAND as Amazon exclusive titles, but with SON OF ZEUS coming--it finally makes business sense to share this story with a potentially wider retail ecosystem, too.
I hope you'll all enjoy BOTH of Pirithous's adventures now that they're going to be available outside of the kindle sphere!
As always, if  you've already enjoyed any of my books, do consider leaving a review wherever you bought it or like to review your reads.

Amazon | Barnes&Noble | IndieBound
Posted by Amalia Carosella at 13:06 No comments: