A Story of Helen

Firstly, I think it is important to tell you what these books are not: They are not the story of the Trojan War.

I know. It is super counter-intuitive, because Helen of Sparta/Troy is the face that launched a thousand ships! She's the reason the whole war touched off at all. So anyone who knows their myths is totally reasonable in expecting a book about Helen of Sparta to be a book about the Trojan War.

But there is more than one narrative surrounding Helen of Sparta. All of them lead to the war, sure. A war completely arranged like pieces on a chess board by the gods. And there certainly is a war -- the Trojan War, in fact, as a result of the events of HELEN OF SPARTA and BY HELEN'S HAND.

The only trouble is, that story -- the story of the Trojan War -- that's the story everyone knows. That's the story that's been told and retold a hundred thousand times across every medium, from oral storytelling to vase paintings to scrolls to tapestries and mosaics to murals to frescoes to sculpture to plays and more plays to books to music to more books to movies to today.

And this isn't about remaking the wheel -- just examining a bit more closely an overlooked spoke. The Trojan War is absolutely significant. Far more so than any other mythic-historical event, for inspiring us to study the past, for enduring in our cultural memory for so long. It's an important story to tell. And it's been told very well.

But I don't think that Helen lived only for the Trojan War. The gods might have tied her fate to it, but that doesn't mean there is not more to her story than the inevitable blood and death. Sure, there doesn't have to be. Most of the sources would agree. But there are a small few who suggest something else, something different -- who open the door to possibility. And it is that story, the one that has not been retold a hundred thousand times, that I wanted to explore.

In HELEN OF SPARTA and BY HELEN'S HAND, I've done so. Beginning with Theseus's abduction of her in her youth and ending... well, you'll see. And I hope that even though it isn't the story of the Trojan War, you'll love it for what it is -- a story of Helen.

(P.S. Don't forget there's still time to #NAMEthatSUITOR and enter to win a signed copy of HELEN OF SPARTA!)
Posted by Amalia Carosella at 00:00 6 comments:

Email ThisBlogThis!Share to TwitterShare to FacebookShare to Pinterest
Labels: By Helen's Hand, Helen, Helen of Sparta, The Trojan War, Theseus 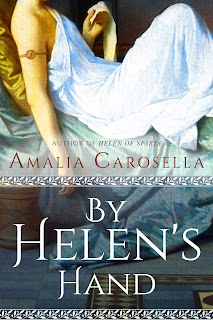 FIRSTLY -- I'll be signing on April 2nd, 1-4pm at Colonie Center Barnes and Noble for Local Author Day! Come on by!

We're only about a month and a half out from the release of BY HELEN'S HAND on May 10th, and I really, really cannot tell you how excited I am to share the rest of Helen's story with you. BY HELEN'S HAND will pick up almost directly where HELEN OF SPARTA left off, with the slightest of detours into the head of a player we haven't met before, and I hope you'll love the new perspectives as much as I loved writing them. (I shouldn't admit it, but -- my personal favorite might be Polypoetes!)

In the meantime, the Audiobook of HELEN OF SPARTA releases on March 29th! Just 4 days from now! (Huzzah!) You can pre-order it in TWO forms -- MP3 CD for copy and paste to your mp3 player of choice, and Audio CD for playing on your traditional CD players. (I am one of these traditionalists, not going to lie. I will never give up my CDs.) It'll ALSO be available via Audible, if that's your jam! ALL are unabridged and for those of you who love or prefer audiobooks -- I hope you'll enjoy!

Also, if you're interested, I put some spoiler-free behind the scenes commentary on Goodreads while I was doing the final proofing of BY HELEN'S HAND. This is something I want to continue to do with future books -- so if you want to read it in real time, make sure to follow me over there! (And I'll be doing the same with my future Amalia Dillin works, too.)


And finally the GIVEAWAY -- and a little bit of a quote from BY HELEN'S HAND to whet your appetites. The First Blog-Reader to NAME THAT SUITOR correctly will win their choice of the Audio CD or MP3 CD of HELEN OF SPARTA! One lucky runner-up chosen at random from all the guesses will win a signed paperback copy of HELEN OF SPARTA with both Helen of Sparta and By Helen's Hand bookmarks!

Include your email address with your guess in the comments below so I can contact you to claim your prize or I will choose an alternate winner! Only comments on this blogpost will be accepted as entries.
(I reserve the right to alter the giveaway/award unclaimed prizes to alternate winners, etc. US only for book/audiobook prizes -- though I'm happy to send signed bookmarks to an international winner if they'd like to play and are chosen as a winner.)

You have until April 1st to get your guesses in!
Posted by Amalia Carosella at 16:59 5 comments: