Paris, Polypoetes, and the Trojan War I Swore I'd Never Write

I should have known better than to say I would never write the Trojan War. I knew I had no intention of doing it as part of Helen's story, for sure, and maybe I should have qualified my statement then--but I genuinely didn't think that five years later I'd be back in this place, desperate to continue Paris's story. Paris of all people!

Since 2018 is the year that I give my authorself a break, and try to remember to write for the love of writing first and foremost, I started writing it. And once I started writing it, I realized something else: It wasn't only Paris's story I wanted to tell. There was Pirithous's son, Polypoetes, too, who was begging for more.

And really, what's the Trojan War without the Greeks? What's the point of retelling the story unless you can see a little bit behind the lines on both sides? The Trojan War has been done and redone a thousand times, but it was always about Achilles and Agamemnon, Menelaus and Odysseus. It was always Hector and Helen and Paris as a convenient scapegoat and coward.

Maybe, I thought, just maybe, this would be enough to set my retelling apart. If I showed the war through the eyes of a less invested hero on the Greek side. If I let Paris be the hero that I knew in my heart he could be. A flawed hero, a failure in the end, but not the coward we've all painted him as again and again--all flash and no substance.

In August's Newsletter I included a little bit of a sneak peek--I've only got six more chapters or so to go, and in a huge change of pace for my authorself, I even have them outlined. But I'm still not done, and honestly? Because it's still 2018, I'm not putting any pressure on myself to finish it yet. (Which leaves you plenty of time to catch up by reading HELEN OF SPARTA and BY HELEN'S HAND before I do!)

Even so, I'm excited. So excited, that I wanted to include another brief peek behind the curtain for you all, here!

“You wish me to speak with them?” Her hands knotted into the fabric of her overskirt, her eyes casting about the room, avoiding his own. “With Menelaus among them?”

“Perhaps,” Paris said, taking her hands in his and guiding her to a seat upon the bed’s edge, hoping to settle her. Never before had he ever seen her so unnerved. Not since that first day after she had returned to him in Egypt. “But Helen, you will not face them alone. Hector and I will stand beside you, and Priam and Hecuba as well. You need not fear them. They cannot touch you while you dwell behind Troy’s walls as my wife.”

She swallowed hard, twisting her fingers through his and staring out at the city beyond the balcony. What he would have given to know her thoughts—but though they shared much, Helen still kept her own counsel more often than he liked. Whatever else had changed between them when she had given herself up, at last, that much had stayed the same.

“I do not see what good it will do,” she murmured. “To parade me before them again, to tease them with what they will not have—what they would have never kept. By leaving Menelaus, have I not left them all? Chosen a foreign prince over everything they offered.”

He squeezed her hands. “But you did not choose, not truly. The gods chose for us. Zeus and Aphrodite bound our fates together, our lives and our hearts. In truth, were we not both powerless? How can any man expect you to defy the gods? To defy your own father?”

She pressed her lips together, her gaze returning to the city, to the horizon beyond it. As if, if she only looked hard enough, she could see the ships themselves and the men upon them. And then she tipped her head, just slightly, and he knew she had made her decision.

“A sevenday, perhaps. No more than a fortnight, to be sure.” He grimaced. “There are few villages left for them to plunder on their way here.”

Her eyes sharpened, her gaze finding his and the corners of her mouth turning down. “Hector sent out messengers, did he not? To warn them.”

“Yes,” he assured her, wishing he had never mentioned it at all. She hated it, he knew. Every bit of blood spilled, every life taken in her name. She tried to hide it, but it was not hard to see if you knew how to look. And ever since Egypt, her true face had been open to him, the queen’s mask torn away. She had become guileless in a way she had never been in Sparta, and that, beyond anything she had said or done, had convinced him of her love. Persuaded him that he had finally won her. “Our swiftest ships and our fastest horses, and we have taken in all the men, women, and children who have heeded our warning. To the good, truly, for it will mean more men to swell our ranks as soldiers when we must fight. A greater show of force. The nearer the Achaean ships get to Troy, the fewer innocents they will find to slaughter. We are doing everything we can, I promise you.”

She nodded, but he knew it was not enough. The way worried lines creased her forehead, and her pretty mouth still curved down instead of up. The way her gaze had slipped from his again, even if she had not turned away.

“Helen,” he said softly, tipping her face up to his to catch her eyes, willing her to hear him. “If the gods are determined upon this course—there is nothing you or I can do to stop it. You must remember that. You must remember that none of this blood is on your hands or mine. We have only done as the gods wished us to do, as they demanded in truth, and there is no turning back now.”


If you're interested in more of my musings on Paris's character while you wait for me to finish writing this hopefully-will-stay-novella-length project, check out my post on Paris and Oenone, and maybe The Sins of Paris, as well. And of course, there's plenty of Paris to be found in BY HELEN'S HAND, too!

Amazon | Barnes&Noble | IndieBound
Posted by Amalia Carosella at 09:30 No comments: 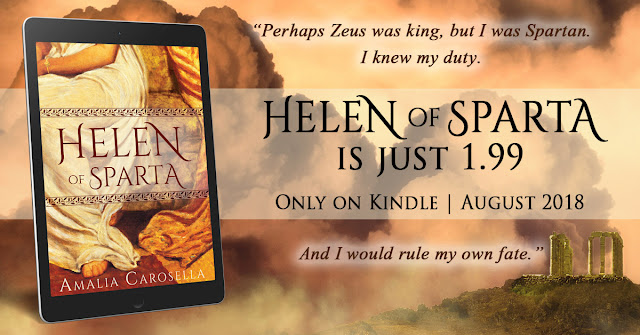 For the month of August, grab Helen of Sparta for just 1.99!
Don't forget to follow it up with By Helen's Hand, and/or prequel it up with Ariadne and the Beast and Tamer of Horses! If you recently read and loved Circe by Madeline Miller (I sure did!)--Helen should absolutely be on your TBR, too!

Things have been a little bit all over the place for me this summer, between family adventures and authorstuff. Publishing is such a strange beast. Sometimes it feels like you have a tiger by the tail. Sometimes you think you're on your way to the finish line only to get bounced back to start. But as long as I'm writing--I can't even tell you how much I love the writing.

This month, Newsletter Subscribers got a sneak peek of my most recent Mythic Bronze Age Work-in-Progress (I usually share a small snippet of whatever I've been working on that month at the end of every issue of the Amaliad). And I'm going to share the latest newsletter with you all here--to give you a taste of what you're missing if you haven't subscribed yet!

So Klikk Klikk get a peek at what I've been writing, and then make sure you subscribe so you don't miss out on future WiPpets!

I'm not sure yet when this one will be finished--or how long it'll end up being. It's definitely an epilogue to Helen of Sparta and By Helen's Hand, and doubly definitely takes on the Trojan War that I swore I would never write. But assuming I can keep it novella length, maybe I can get it out into the world sooner rather than later. Sooner being completely relative, of course. Because while I only have 6 outlined chapters left to go, it's something I've only been picking at on the side while I'm working on other projects, and there are contract things to negotiate too. So! We'll just have to see how it goes. And I'll of course let you know--one more reason to subscribe to the Amaliad, I suppose!

Amazon | Barnes&Noble | IndieBound
Posted by Amalia Carosella at 17:55 No comments: