Lapiths vs Myrmidons vs Centaurs -- TAMER OF HORSES has ARRIVED!

Now that TAMER OF HORSES is out in the world in print and for kindle, I thought it might be a good time to revisit some of my research from the drafting stage of TAMER -- just in case it got lost in the archives.

But let's start with a map to put things in perspective, shall we? Always remembering, of course, that the people of the Bronze Age didn't have the benefits of flight or satellite imagery, so their understanding of the lands and seas on which they plied their trades was probably a little bit more... relative. 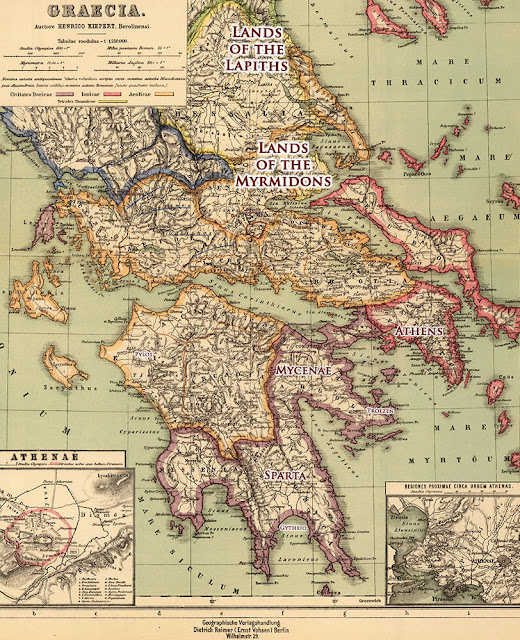 Both the Myrmidons and the Lapiths were essentially tribes of men (and women) living in and around the greater region generally referred to as Thessaly in the myths, which made Peleus and Pirithous more minor kings tucked away in the North, farther from the action and trade within and without the Peloponnese and Attica. In TAMER OF HORSES, I've made them rival tribes as well, though I'm not sure there's anything to support the idea outside of the common and casual references to raiding the cattle and livestock of one's neighbors which we see repeated in the myths -- Castor and Pollux, Helen's brothers, were even killed during a cattle raid (or at least Castor was, at any rate), and we know that Pirithous and Theseus met when Pirithous sailed down to Attica to test Theseus, who he'd heard so much about, by raiding his cattle.

Extrapolating from these stories, it's entirely possible that any two kingdoms might have found themselves at odds with one another, stealing livestock back and forth, and since the Lapith people were known for their horsemanship, it felt natural to make the half-wild horses in Pirithous's possession an object of these kinds of raids. But whether or not the horses of the Lapiths were in fact some exceptional variant bred from the Mares of Magnesia or the like, or just common animals -- well, we'll never know! It IS however, possible, that the myth of the Centaurs themselves sprang from the horsemanship of those bronze age peoples from Thessaly, seen by travelers or foreign raiders riding their horses through the trees and so in tune with their animals that they might have been confused for half-men, half-beasts.

I can't decide which version of that story I prefer -- but in TAMER OF HORSES, I let the centaurs be centaurs, because who am I to gainsay generations of Ancient Greeks?

No matter their differences, neither Hippodamia nor Pirithous expected their wedding banquet to be the first battle in a war.


TAMER OF HORSES, available NOW in paperback and for kindle!