Hosted by Aimie K. Runyan, author of Promised to the Crown, we're traveling the world (and history) with ten great historical fiction books and giving away signed copies of ALL of them at the end! The tour begins Here. 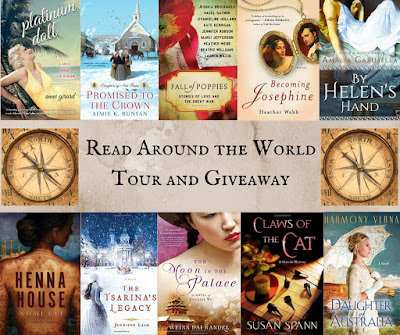 Don’t forget to bring plenty of guest-gifts with you when you travel through Bronze Age Greece. Guest-friendship was one of the most sacred bonds, and your best bet for traveling unmolested in and out of the incredible palaces of the Achaean kings. You won’t want to miss the imposing Lion Gate of Mycenae, or the sprawling palace at Knossos on the island nation of Crete – perhaps not quite so impressive as it was during its height, before the Minotaur was defeated and Minos fell, but worth the journey all the same.

The Rock of Athens has weathered every storm, an impenetrable walled fortress upon the Acropolis from which King Theseus rules Attica and Crete with the advice and counsel of his assembly. Be sure not to snub King Nestor of Pylos, either – an entertaining host with a story for every occasion, you’ll find your poor reputation precedes you if he feels that he’s been slighted.

And of course, across the sea, there is the golden city of Troy, its walls the work of Poseidon himself. You’ll find no finer palaces, no grander treasures than those inside Troy’s towering walls – at least not outside of Egypt. But tread carefully if your curiosity draws you to the Nile Valley, for Egypt is not often known for its kindness to foreign travelers, even when they come with rank and riches aplenty.

...Even if you're Helen of Sparta.