Sometimes I wonder how much of the raping and abduction of Amazons is the boasting of later writers/descendants/cultures looking to justify their then-current patriarchal way of life, because to suggest these heroes met their equals and recognized a woman as a PERSON by falling in love didn't fit their cultural agenda/understanding of the world. 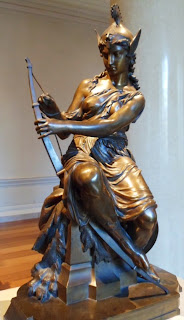 Is it wrong to turn a mythic abduction into a romance in which the woman has agency? In which the woman has choice, and the man recognizes her as his equal, and offers her a place at his side without violence? Or is this the natural evolution of what these myths should become, now that women are not simply seen (or only seen) as property and prizes?

How much misogyny do we read back into the myths because we're expecting it to be there, or even assuming that it is the only possible interpretation? For Classical Athens, yes, there certainly was a good bit of it -- but these stories predate Classical Athens. Is it possible the Mycenaeans with their imagery of women seated upon thrones accepting offerings, their goddesses accepting gifts, their daughters through which kingdoms were inherited, might have lived differently?

One of the things I loved about writing Tamer of Horses after Helen of Sparta and By Helen's Hand was the difference in upbringing between Hippodamia and Helen -- Hippodamia, as a foundling child raised by centaurs, did not have to be Greek the way that Helen was. She wasn't raised in a palace, she isn't bound by the same kind of cultural restrictions we would expect of an ancient Greek civilization. And while I found for Helen some amount of agency even writing within those strictures, Hippodamia was a woman whose agency didn't have to be carved out or shoehorned into a pre-existing mythic structure that demands her passivity.

I'm going to keep carving and shoehorning. I'm going to keep spinning agency and equality into my retellings of myth. I'm going to keep fighting the idea that the Amazon must be Abducted as a metaphor for the triumph of "natural order" over the chaotic force of women leading their own lives, and opt instead for a narrative of recognition and understanding. Because in the end, I still believe that these myths are living things -- and in order to keep them relevant to our world today, they need that kind of bending and stretching. But also because, completely honestly, those are the stories I want to read.

We're blogtouring May 16-June 24th to celebrate the release of BY HELEN'S HAND (Helen of Sparta #2) -- available NOW in paperback, audio (cd, mp3, and audible), and for kindle. I hope you'll join us by sharing your own reviews on Amazon, Goodreads, or wherever you like to talk books!

And if you enjoyed my take on Helen, don't forget to subscribe to THE AMALIAD for a free short story prequel to HELEN OF SPARTA: Ariadne and the Beast!