Since it's been a while, and most of my posts relating to the research and reading I did to write HELEN OF SPARTA and BY HELEN'S HAND are buried in the archives, I thought it might be a good idea to bring some of them back to your attention, hero by hero and topic by topic, so when May 10th rolls around, you'll be as ready to read as I was to write!

NB: The Myths are the Myths, but most of these posts will include my perspectives and approaches to them, which could be spoiler-ish, so proceed with caution!

I hope it isn't too much of a spoiler to admit, but Pirithous isn't really in BY HELEN'S HAND. He's mentioned, and referenced, but he's more of a ghost between the pages than anything else. If you know anything about his mythology -- well, I'm sure you know why.

Pirithous's son does just happen to make an appearance. Polypoetes, it turns out, is one of the many men listed as one of Helen's suitors. Which gives me an excuse to talk about BOTH of them, maybe, for old time's sake, and to give some extra context to Pirithous's son before you meet him on the page in BHH. 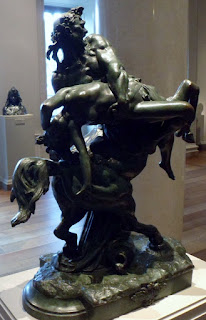 The Bromance of Theseus and Pirithous
One of my favorite myths is the the story of how Theseus and Pirithous meet for the first time. Somehow, the idea of the young King Theseus, making a name for himself as a hero and an upstanding individual -- a king of great wisdom and honor -- being tested by Pirithous the most piratey of rapscallions, just tickles me. (Mild spoilers for Helen of Sparta if you're not familiar with the myths.)


Pirithous, Theseus, and that Ill-Advised Trip to the Underworld (Part I and Part II)
The story goes that Pirithous and Theseus made a pact that they should both marry daughters of Zeus, because they were demigods and as such deserving of marriage to women of divine lineage. Leaving aside the fact that a daughter of Zeus would also be Pirithous' half-sister and the marriage slightly incestuous, a demigod deciding he deserves some kind of honor or another for himself is never really a good idea. Hubris is never, ever, ever a recipe for success for any demigod or mortal. The gods just do not put up with it. (Definitely a spoiler for Helen of Sparta)


The Centauromachy
The Centauromachy, the war with the centaurs, doesn't seem to me to be something that can be overlooked for either of them. I can't get around the idea that the abduction of Hippodamia by the centaurs (her kin!) on her wedding day, of all days, and the subsequent bloodshed at the wedding feast, would be emotionally traumatizing not just for Hippodamia and Pirithous, but for the rest of the community as well, centaur and human alike. (This myth takes place maybe 20-30 years before Helen of Sparta, so Spoiler Free, but it's a very influential event both for Pirithous and, I believe, his son. Polypoetes is the son of Hippodamia, after all.)


Writing Polypoetes, Son of Pirithous
Among the men listed as suitors of Helen, and those named as leading ships to Troy, we find the footnote of Polypoetes, the son of Pirithous. I've done a lot of THINKING (and writing!) about Pirithous, and Polypoetes's mother, Hippodamia -- but until I started writing BHH, I hadn't really considered their son. (Definite Spoilers for Helen of Sparta and mild spoilers --primarily of motivation for BHH!)


There's a goodly sum of other... interesting? posts regarding Pirithous over at ye olde Good to Begin Well (again.) Including a small scene from a paranormal romance novel I've been poking at which features Pirithous in the modern day (because I guess I can't help myself). And of course you can find MOUNTAINS more on Hippodamia and the Centaurs by clicking through the appropriate tags on this blog, from when I was working on my Hippodamia/Centauromachy book. So feel free to explore, but just know there is a risk of happening upon the spare spoiler in plain sight!

If you enjoyed Helen of Sparta don't forget to pre-order your copy of BY HELEN'S HAND -- available May 10th in paperback, audio (cd, mp3, and audible), and for kindle! Or maybe just mark it to-read on Goodreads in the meantime :) And don't forget to subscribe to THE AMALIAD for a free short story prequel to HELEN OF SPARTA: Ariadne and the Beast!