Since it's been a while, and most of my posts relating to the research and reading I did to write HELEN OF SPARTA and BY HELEN'S HAND are buried in the archives, I thought it might be a good idea to bring some of them back to your attention, hero by hero and topic by topic, so when May 10th rolls around, you'll be as ready to read as I was to write!

NB: The Myths are the Myths, but most of these posts will include my perspectives and approaches to them, which could be spoiler-ish, so proceed with caution!
Okay, so maybe it's a little bit of a stretch to refer to the period as a hero -- but! historical period and setting certainly play a major role in how the story unfolds! In revisiting Theseus and Pirithous, we've already talked about how heroism among the Greeks was different than our definition and expectation of it today (and how, in my most humble opinion, this makes Theseus unique in comparison to someone like Heracles or Pirithous) but there's more to the Bronze Age than Heroics!


Helen of Sparta's World (Mapped!)
We take for granted the incredible accuracy of our maps today -- but for Helen and Theseus, and their fellow bronze age heroes, the shape of the world was a little less... precise. For those of you looking for a better idea of the Geography as you read, here's a rough idea of where the cities of Mycenae, Athens, and Sparta were, in relation to one another, and the kingdom of Pirithous's people, the Lapiths, in the far north of Thessaly. (Spoiler free!)

And onward to a little bit of culture--


Mycenaean and Homeric Burial Practices
This was a FASCINATING topic to read up on, so if you have the interest, make sure you follow the links in the post! The most important takeaway: while Homer makes much of the funeral pyre and cremation of the dead, there is little to no evidence of cremation taking place in Mainland Greece during the period (LH IIIB ish) of the Trojan War. But I also talk about my thought process as an author in how to address the difference in what the casual reader might expect from a book that's part of the Trojan War cycle of mythology. (Spoiler free!)


The Middle Class of Mycenaean Greece
Professor Dimitri Nakassis (of the University of Toronto) theorizes from his study of the Linear B tablets that the old model of PALACE and PEASANTS for Mycenaean Greek society should be modified to include a thriving middle class and large variety of contracted local elites. Dr. Nakassis is definitely a man to watch in this field, and his research is absolutely fascinating. (Spoiler free!)

And for added fun -- check out the Bronze Age RISK board El Husband created for the HELEN OF SPARTA launch party: 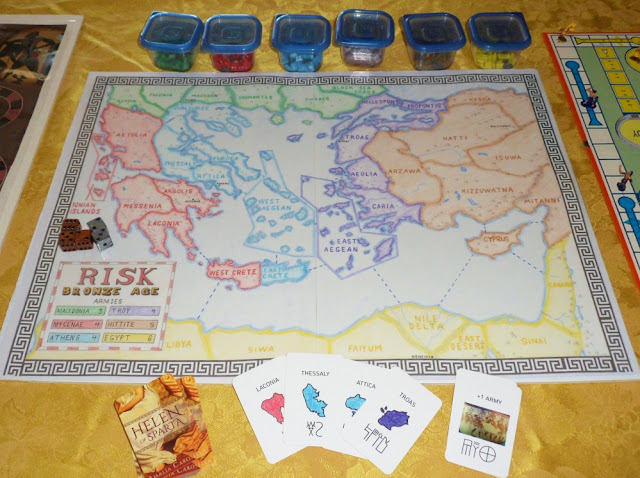 If you enjoyed Helen of Sparta don't forget to pre-order your copy of BY HELEN'S HAND -- available May 10th in paperback, audio (cd, mp3, and audible), and for kindle! Or maybe just mark it to-read on Goodreads in the meantime :) And don't forget to subscribe to THE AMALIAD for a free short story prequel to HELEN OF SPARTA: Ariadne and the Beast!