I can't promise a bonus quote every week -- there are a couple of sculptures of mythic figures in my hoard who I haven't referenced even obliquely in my books, and in fact, this quote is kind of a stretch but(t)! Name this Book, and you'll get your 2 bonus points, regardless! (If only Helen's Sequel were out, I'd have a much better quote -- but alas and alack!)

And don't forget to #NameThatButt over at blog.amaliadillin.com, when you're done here! But at LEAST click over to see the reveal for Round 2 because it's one of my favorites of this year's game! 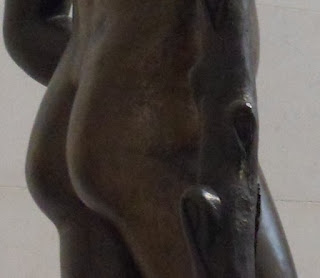 The Northlands had fallen to the Christians, one after another. All but the Sami, in the far north, and the peasants and Samogitians of Lithuania, to the east, had converted. The old ways were outlawed along with the worship of the gods who had nurtured them for so long. There were those among the converted lands who still made sacrifice in private, praying to Freyr to protect their crops, or calling upon Odin to give them strength in battle, but every year, they grew fewer in number. Every year, the gods of Asgard spoke of moving on. And every year, Odin refused to be persuaded, his one-eyed gaze falling upon Thor, and grimmer lines forming around his mouth and eyes. Odin had never forgiven him for Loki’s murder, nor was he at all pleased that the Council had sanctioned it. But that was not all that lay between them.

“All these years, and you are still under her spell,” Odin had spat, after Thor had told him he would not go on to the new world that Zeus and his brothers had found, regardless of any decision made by the Aesir.

XXXX and Anubis traveled between the two planes, now and again, bringing news and invitations. The Covenant had forged bonds between pantheons that had not been forgotten, and Zeus had not quite given up on reclaiming his wisest daughter. Most of the Egyptians had left, at Ra’s urging, and a good many of the Persians had followed. There was no longer room for any worship but that of Elohim in those lands.


Name that Book! And maybe the mysterious XXXX's backside will come into better focus! :)
Posted by Amalia Carosella at 00:00

View my complete profile
Author of historical fiction, including:
Helen of Sparta,
By Helen's Hand,
Tamer of Horses
,
Daughter of
a Thousand Years,
&
A Sea of Sorrow:
A Novel of Odysseus;
lover of heroes & myth.