Ready for Round 2? Come #NAMEthatBUTT over at blog.amaliadillin.com! But(t) first: Name this Book for 2 extra bonus points this week! 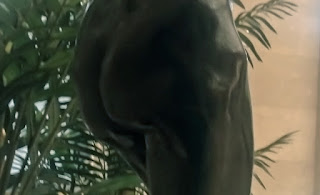 My photography might not be great but hopefully my writing doesn't disappoint -- here's this week's Bonus Quote!

Reu was watching her, searching her face. “What will you do?”

[She] stepped toward the tree, and the low branch from which the serpent had hung. One of the fruits, hidden in the red leaves, winked with a flash of sunlight. A faint tingle traveled down her arm as her hand closed around it and the fruit came free. The branch swayed, relieved of its burden, weeping the broad scarlet leaves in a shower around her.

The fruit was heavy in her hand. Much heavier than an apple would have been. She wondered briefly about the angels. Who they were, and what they would do to her when they realized she had broken God’s law. Sin, the creature had called it. But was it, really? Or was it wisdom, for the greater good, like the story Reu had told her about the one-eyed man in the sky?

She raised the fruit to her lips.

Name that Book in the comments below, or Name that Butt AND Book over at blog.amaliadillin.com and aim for the title of #NAMEthatBUTT Champion!

(But seriously you at least want to check over yonder next Tuesday for the full frontal reveal of this sculpture because it is frankly phenomenal, in my most humble opinion. A very different take on its subject!)
Posted by Amalia Carosella at 00:00