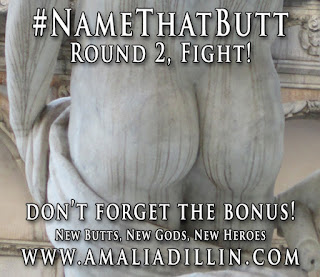 If you're not already playing #NAMEthatBUTT over at blog.amaliadillin.com -- it's not too late to jump in! Round 2 is LIVE, and to celebrate, you've got TWO bonus opportunities! One relating to the sculpture's location, and the second HERE, With a #NAMEthatBOOK companion quote!

To collect your 5 #NAMEthatBOOK bonus points, all you have to do is correctly identify which book of mine (as Amalia Dillin or Amalia Carosella) I've pulled the quote from and drop your guess in the blog comments either on this post or the round two post yonder. The deadline to #NameThatBook is the final reveal of the final #NameThatButt backside, so you've got time to do some last minute reading if you need to!

The bull had been the god, come to test him, and one glance at Oenone had told him she had known all along. But he had bitten his tongue and knelt before the god of war, the bronze bull melting into an armored man, breastplate embossed with a bloody battle, so real, so grim, Paris could hear the cries of the dying when he looked upon it.

And that ruthless god, friend to no one, had laughed and called him just, named him honest and fair.

“Do you not see?” Oenone said later, after all the rest had gone, and they had led Tauros back to his herd, awarding him the heifer for his work. “I did it for you! Now, all of Troy will know you for your judgment, will praise you for your nobility. You are more than just a shepherd’s son, Paris, you are marked and acclaimed by the gods themselves. Surely you must be satisfied by that.”


Comments are MODERATED -- so you won't see your guess posted on the blog. It'll be delivered straight to my inbox instead, where I'll hold it until the final butt has been revealed.

And don't forget to #NAMEthatBUTT for this round if you haven't already! You have until SATURDAY this week -- because election day -- when I post the reveal.

View my complete profile
Author of historical fiction, including:
Helen of Sparta,
By Helen's Hand,
Tamer of Horses
,
Daughter of
a Thousand Years,
&
A Sea of Sorrow:
A Novel of Odysseus;
lover of heroes & myth.