This is it, guys! The final round!! And I've got a final Bonus Quote for you, too -- though it might be a little bit anti-climactic if you've already determined the identification of our twin ultibutts!

(To be honest all the best bonus quote action for these two butts is in a forthcoming title -- but that wouldn't be fair quote-play!) 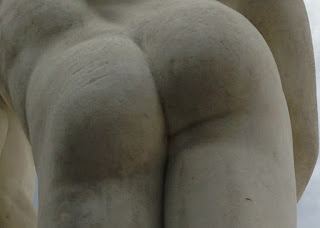 A horse whinnied, drawing me to the window. The messenger stood with his animal, greaves, cloak, and leather chest-plate covered in dust from the road. My brothers greeted him, looking as though they had come straight from the practice field. They certainly didn’t look like twins, but of course the priests had attributed that to parentage, and said the same again when Clytemnestra and I were born, three years later, different as moon and sun in appearance and temperament. Leda swore Zeus had been in her husband’s guise the first time he came to her. She only realized the deceit later that night, when Tyndareus himself had returned and took her to bed a second time. The priests believed, then, that fair, green-eyed XXXX had been born of Zeus, and dark-haired and olive-skinned YYYY came from Tyndareus’s mortal seed. When my brothers’ looks were repeated in Clytemnestra and me, their declarations were only made more convincing.


Be sure to drop your guesses in the comments, and if you haven't already, hit up blog.amaliadillin.com for this week's clues, to #NAMEthatBUTT after you #NAMEthatBOOK!

But as a special treat for this Bonus Quote Finale, here's a snippet of an unedited cut scene from the BOOK you're guessing, as well! Call it Bonus-Bonus content...

Acamas brought me my evening meal, for Aethra could not be spared from the banquet without insulting the guests. I smiled and insisted that he sit with me while I ate, for I wanted desperately to hear the news from Sparta, and I had learned quickly that Acamas heard most everything in the palace. He was still young enough to be overlooked, and old enough to know all the best places to listen.

“You should have seen the horse he rode!” Acamas told me, his eyes bright with excitement and his cheeks flushed. “Black as night and taller than any in Father’s stables. It must be Poseidon’s own stallion!”

“Is XXXX not with him?” I asked, picking through the vegetable relish for the sweet peas. I saw no reason to eat cabbage if I did not need to, though it went well enough with the goat meat.

“Just the son of Atreus.” Acamas wrinkled his nose with distaste. “He demanded that Father let them search the women’s quarters, but of course Aethra would never allow it. She was offended more than Father, I think, and YYYY apologized. Menelaus is certain you must be here, but I do not think your brother believes it. He said that all of Sparta grieves for your loss, and offerings are made to Zeus each day, asking that you be returned unharmed. So many, the priests are growing fat on them! Queen Leda refuses to leave her rooms, and King Tyndareus has sent men out to every corner of Achaea, but it is rumored among the Spartans that Zeus took you to Olympus and so Tyndareus sent XXXX to Delphi to learn what he might from the Oracle.”

“Let us hope that the Oracle keeps our secret, then.” I offered him a fig and he took it with a grin.

Email ThisBlogThis!Share to TwitterShare to FacebookShare to Pinterest
Labels: #NAMEthatBUTT