Poseidon is Classier than Zeus (Poseidon and Tyro)

So here's the thing. I kind of like Poseidon. There's something about him that captures my heart in spite of the fact that he shares MANY of Zeus's flaws -- particularly in the way he uses women to slake his lust. It's possible my appreciate for Poseidon might just be the reflected glory of my absolute adoration of Theseus, his son, but then there's also the story of his affair with Tyro, which could kind of almost be considered romantic maybe if one overlooks the fact that it's all done under false pretenses.


Now Tyro, daughter of Salmoneus and Alcidice, was brought up by Cretheus, brother of Salmoneus, and conceived a passion for the river Enipeus, and often would she hie to its running waters and utter her plaint to them. But Poseidon in the likeness of Enipeus lay with her, and she secretly gave birth to twin sons, whom she exposed.


But Homer! Oh, the way Homer tells this story, in the Odyssey makes me really appreciate Poseidon's class:


She [Tyro] fell in love with the river Enipeus who is much the most beautiful river in the whole world. Once when she was taking a walk by his side as usual, Neptune, disguised as her lover, lay with her at the mouth of the river, and a huge blue wave arched itself like a mountain over them to hide both woman and god, whereon he loosed her virgin girdle and laid her in a deep slumber. When the god had accomplished the deed of love, he took her hand in his own and said, 'Tyro, rejoice in all good will; the embraces of the gods are not fruitless, and you will have fine twins about this time twelve months. Take great care of them. I am Neptune, so now go home, but hold your tongue and do not tell any one.'


The problem with all of this, of course, is that it's still incredibly deceitful. But I suppose if she thought she was making love with the River (or did he put her to sleep and then make love to her? I'm going to hope that wasn't the situation) then at least she must have rejoiced in her unrequited love being fulfilled at last, maybe. Until Poseidon revealed himself, anyway. But even then. The way this particular translation presents it feels very... Old Testament Word of God to Mary regarding Jesus. And of course, if we're to believe Apollodorus, it seems that Tyro wastes no time in discarding the fruits of that union, but that could very well have been because of other pressures -- her father, perhaps, who wanted to see her married, and feared anyone worth anything as a match would refuse if she came with twin bastard sons of Poseidon. And let's face it, that was bound to be a consideration. Unlike the Aegeus/Poseidon/Aethra business which resulted in Theseus, these twins weren't coming with a kingdom for their future inheritance. They were just coming. 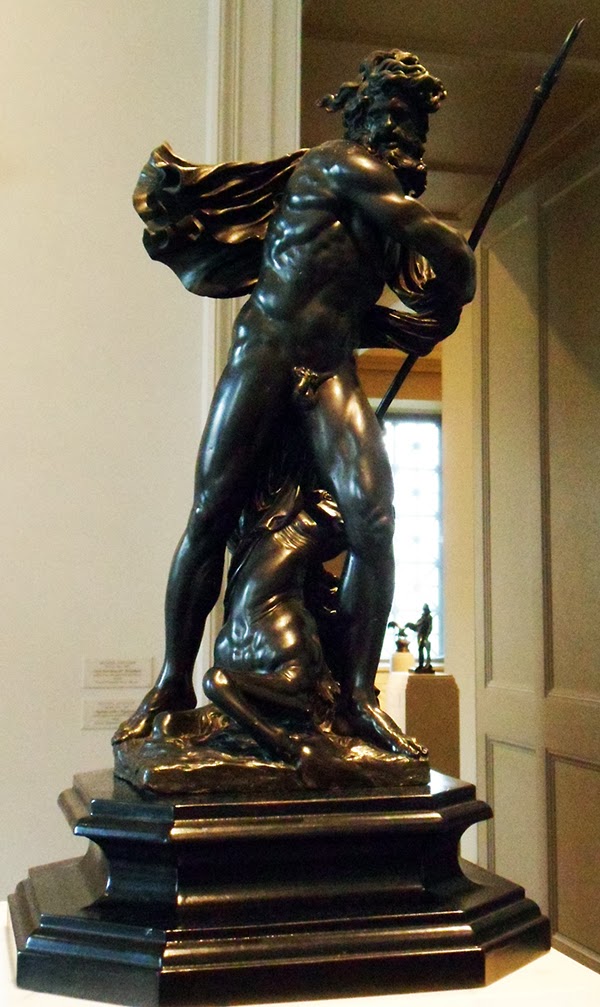 But I've got to admit that I do love the image of the giant blue wave arching itself over the two of them as a little love shack. And, wonder of wonders, aside from being knocked up, Tyro didn't get smote by any other gods or goddesses for the trouble Poseidon brought her! (In this instance, I think Tyro won the lottery--Poseidon's consort/wife Amphitrite did not seem NEARLY as interested in taking revenge on the women he seduced.) She just went on to be married to Cretheus -- father of Aeson, and as a result, grandfather of that Jason.

The twins she bore Poseidon were Pelias and Neleus. As you might imagine, they survived their exposure to grow up and cause trouble in the usual heroic style. Learning their true heritage and killing some people while earning the enmity of the gods. Pelias in particular seemed to get on Hera's bad side, which isn't typically the BEST idea.

According to Apollodorus, Neleus founded Pylos, and was the father of Nestor, a hero/wise-old-king from the Iliad.*  At the opposite end of Greece, Pelias wound up in Thessaly where he became King of Iolcus and eventually sent Jason (his half-brother, Aeson's son) on his famous quest for the Golden Fleece with the Argonauts.

Like I said. Trouble in the usual heroic style.


*Pretty sure this means that Nestor is Theseus's nephew, since Theseus would have been a half-brother of  Neleus. Which is pretty fascinating. All these guys are related like weirdy/awesome, and I really find it strange that it doesn't get pointed out more in our modern retellings. I get that the Greeks might not have cared, or even considered it a true relation, but for a modern audience, it might be a useful framing.

Crooked and non-crooked photographs belong to me.
Posted by Amalia Carosella at 00:00