Europa and the Bull

Europa was probably the daughter of a Phoenician King, Agenor, and the story goes that one day she was out in the fields with a passel of other maids when she came across a bull of uncommon beauty. Not only that, but this bull was so tame it let her weave wreaths of flowers around his horns (and I can just picture this group of girls making flower wreaths and laughing and daring one another to toss them around the bulls horns -- I don't know about you.)

Europa, enamored by his gentleness as well as his beauty, and maybe not really aware of Zeus' propensity for making off with women since she isn't exactly Greek, climbed up on the bull's back. The bull, really Zeus in disguise, promptly runs for it. He goes straight for the sea, where he swims and swims and swims until they reach Crete, and Europa is well beyond the reach of any help. At this point, he either reveals himself, and then consorts with her, or consorts with her and then reveals himself. There isn't really any knowing. But either way, Europa is made off with, and either way, she ends up married to a Cretan prince, giving birth to Minos, and becoming the grandmother of Ariadne.


Zeus loved her, and turning himself into a tame bull, he mounted her on his back and conveyed her through the sea to Crete. There Zeus bedded with her, and she bore Minos, Sarpedon, and Rhadamanthys; 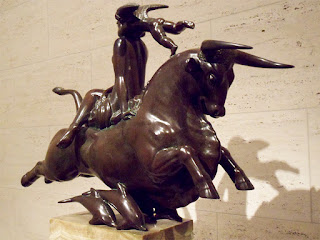 One of the things that strikes me about this story is how very different Europa's response is to an impressive specimen of bull-ness. In this day and age, how many princesses are spending time with the cattle? And how many wouldn't hesitate to climb up on the back of one, no matter how tame it seemed? Maybe if you were raised on the farm, it would be one thing -- but bulls? They're big animals, and no matter how familiar, they deserve a healthy dose of respect.

Sure, part of it might be Zeus' mojo, but part of it is definitely the difference in context and culture. Back in the Bronze Age, the wealth came from the land, from the farm and livestock, and while I doubt Europa was mucking stables or herding her father's cows, you can bet she was a lot more familiar with cattle than the majority of the western world is, today. Bulls and cattle wandering around? Nothing to worry about at all!

Not to say all the women were leaping up on their backs, but -- it's not nearly as outrageous for then as it sounds to us now.

images in this post © me!
Posted by Amalia Carosella at 00:00